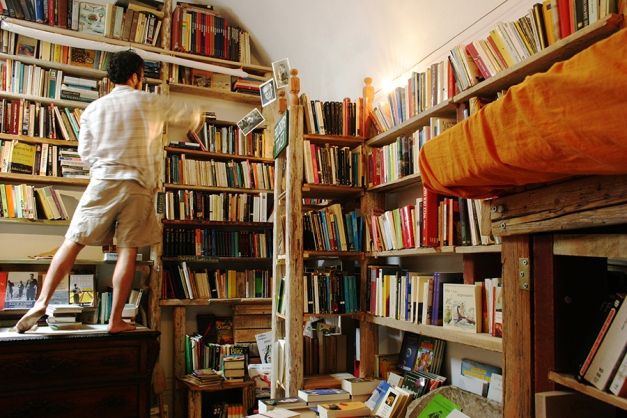 When I peeked through the glass window of the blue-framed door that morning, a man was doing his morning exercise. He was a man in his early thirties, dark hair, small and slim. He wore spectacles and a brown T-shirt from the Japanese film Battle Royale. He was surrounded by shelves of books. “I was wondering what time you open?” I asked.

This was a small English language bookshop in the town of Oia, on the volcanic island of Santorini, of Greece. In a town without house numbers, Atlantis Books was located in the basement of one of the numerous whitewashed Mediterranean cave houses. A few years ago, Craig, Oliver and Chris settled a debt, found books, shipped them and came to Santorini. Together with some others, they collected driftwood from the beach, and built a bookshop with beds. From then on, Atlantis became a second Shakespeare and Co: a home to travellers, writers and their beloved books.

“Do you have a place to stay tonight then?” Luke spoke with a north London accent. I said, “Not really.” With his invitation, I was given a bed among the bookshelves, in the back room of the bookshop. After spending years in Paris, Luke was living and travelling between Italy and Greece. As a thirtysomething man with no money, Luke knew every single book in the shop and he was writing a novel.

When I came back from a swim in the cove, I met John, the poet. John was a good- looking young Welshman with an Oxford accent and a nervous look. He stuttered a wee bit when he spoke. He had been staying in the bookshop for a couple of weeks before moving to Berlin to write full-time. When Natalie came up to the terrace, John and I were sweeping off the remnants from a recent storm. Natalie was in her mid- twenties, tanned and spoke with a California accent. With half of her face covered under her novelty sunglasses, she stood, chatting with us while we were working. She had been on the island for a year and half. She fell in love with the place and decided not to leave, thus, she became an illegal resident after her tourist visa had expired. She worked as a waitress during the summer, and for the rest of the year, she just lived her life.

So it is, I began my island life in a bookshop. In the mornings, I’d get up at 10 am, make myself some breakfast and coffee; watched the shop while having breakfast. I’d hear curious tourists walking down the stairs with comments like “look, here is a bookshop!” Often they were Americans, sometimes British or Europeans. I’d talk to them, or help them find books. When it was quiet, I listened to Jazz and read Greek Mythology. I’d have my lunch in the glorious Mediterranean sun on the terrace, which overlooked the dark blue Aegean. My afternoons were often spent on the beach with a book, and a Magnum ice cream on the way home. Before the dusk, I’d go to where the tourists gathered to see the one most dramatic sunsets in the world. In the dusk, the Greek girl from the shop next door would call “Luke, Luke”, telling us to turn on the lamp outside the bookshop; and you start to smell the sweet fragrance of the honeysuckle flowers. In the evenings, I’d cook a dinner for whoever was there. More tea and poetry reading would follow after dinner, and some of the night time was spent smoking cigarettes and drinking wine under the stars.

One of my nights in Santorini was making Greek meatballs in Natalie’s cave house at 3 am. We drank lots of wine, smoked lots of cigarettes, and patted street dogs who came in for a shelter. I asked Natalie whether she regretted her decision, that she would never be able to leave this country. She was leaning on the half-opened wooden door and having a fag. Her face looked tired after a long-day’s work, but her smile was all soft and sweet, “No. I think I’ve found my happiness. This is what I want in life.”

Santorini is a wonderland in the summer, but when winter comes, it’d become a deserted island with only whiteness but little sign of people. It’d become a lonely place with street dogs and cats. However, winter for Natalie was for fishing with a local fisherman. On this island, live many other people who know or do not know what they want in life. Nevertheless, for people who love all beautiful things in life, Santorini has its own pace, nice and slow.

When I left Natalie’s flat, the dawn was already breaking. I walked on the edges of the volcanic town, and the ocean was just waking up in the early summer twilight. Quietly I opened the bookshop door. Luke was soundly asleep. Raki, the street dog who came to the shop all the time, quietly followed me in, jumped into one of the beds and went to sleep. 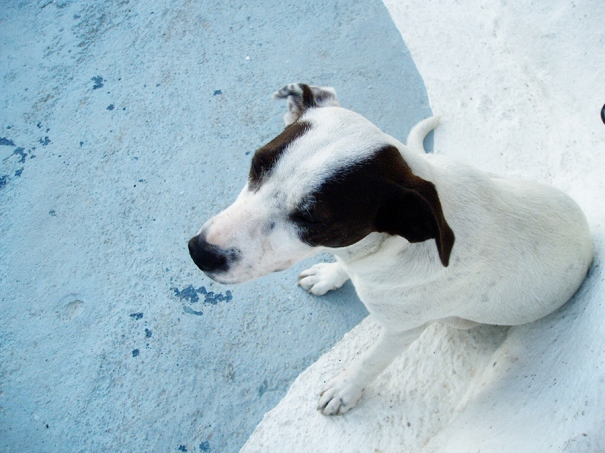 One thought on “Santorini: the Lost Heart”